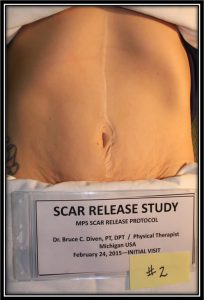 Microcurrent Point Stimulation applies a low electric current non-invasively over the skin of key acupuncture and trigger points to duplicate the pain relieving and cellular changing benefits of acupuncture. When MPS is applied through scars — for the purpose of “releasing” scars — it is called Scar Release Therapy or SRT.

I have collected data on the scar release treatment to measure its efficacy. With data collected from hundreds of treatments provided by various therapists, we found that in a single SRT session a patient’s pain could decrease 60% to 80%, depending on the location of the scar on the body.

SRT is based on the theory that scars and adhesions can adversely affect the structural and fascial systems, sensitize the nervous system, and cause chronic pain throughout the body.

Scars are a result of the body’s remarkable power to heal itself. Scars develop when the deeper layer of skin, the dermis, is damaged. New collagen fibers are laid down at the site of the wound to repair the tissue. These fibers grow in random and unorganized patterns, forming adhesions underneath the scar itself. Adhesions can form deep within the body, attaching to muscles, bones, tendons, and organs.

Imagine how a single pull of this matrix fascial tissue and how it could misalign or cause imbalance in any number of the systems throughout the body.

Here are five reasons why scars may be adversely impacting your health and driving your pain cycles.

Scars cause hypersensitivity in the nervous system and appear to contribute to many chronic pain conditions. Neural therapy shows us the cellular tissue change at a scar site sends noxious stimuli to the nervous system. The scar itself may not hurt, but it can cause pain throughout the body.

Scars pull the fascia concentrically inward towards the middle of the body. This fascial pull acts like a straight jacket inside the body, putting pressure on muscles and nerves, causing pain, and misaligning the skeletal system. This is especially important with abdominal scarring as it seems to distort body positioning, pulling us in a constant forward flexed position. This increases the degeneration of our spines and can create pain in the upper and lower limbs.

Since the fascia wraps around organs, muscles, and tissues, it can negatively affect their performance. Adhesions can affect all internal organs or systems – including the ovaries, bowel and bladder.  I have found in the treatment of patients that releasing abdominal scars significantly improves organ functioning by reducing hormonal fluctuations and improving digestive issues. Having the scars from C-sections released is key if you’re suffering from digestion issues, back pain, hot flashes or sexual dysfunction

Scars can cause electrical disruptions, impairing system functioning and circulation

The scar itself acts like a dam and blocks the vertical flow of electrical connection within your nervous system, which interferes with organ or system functioning

The emotions that surround traumatic accidents, injuries, and surgeries can get trapped and locked into the cellular memory of tissue, causing post-traumatic stress (PTSD). SRT permits the “letting go” or release of emotional trauma stored inside the scar tissue

Scar Release Therapy (SRT) has often been called “needleless neural therapy.” It forces electrons through the thickened scar, stimulating lymphatic drainage and softening the scar and surrounding tissues. The newly released scar is much softer and pliable, with visibly improved blood circulation and diminished appearance. This produces a significant “calming” effect and reduces pain and muscle spasms in patients.

Every year, approximately 80 million new surgical scars are produced by hospitals. Pile that on top of the additional 70 million new trauma scars each year, and you may understand why 100 million Americans suffer from chronic pain.

With few therapists or physicians paying attention to the long term effects of surgical scars on pain, Dr. Diven can effectively release scars of pain patients with failed outcomes from previous therapy and medications.

Ready to be free of pain? Schedule your FREE consultation today.